Chef Del Pilar apprenticed under Chef Ricardo Santana as sous chef for Impressions Gourmet Catering for over 20 years. He currently holds the position of Executive Chef.

Chef Del Pilar  has also been affiliated with the Southern California Inland Empire Chefs and Cooks Association (SCIECCA), a local chapter of the American Culinary Federation.

Through SCIECCA, Chef Del Pilar has also had the privilege of sitting on the judging panel for the graduating classes of the Riverside City College Culinary Academy.

Award winning Chef Ricardo Santana has been a chef at Impressions Gourmet Catering since 1991.

Raised in Ontario, he began his culinary career at 17 cooking in small dinner houses, as his proficiency increased, so did his responsibilities.

Santana was a member of opening team at the Maruko Hotel and Convention Center in San Bernardino.

Later, as the sous chef at the Castaways in San Bernardino he worked with Master Chef Don Cadiente. When Cadiente moved to the L.A. County Fairgrounds as executive chef he recruited Santana as his executive sous chef.

In addition, Santana served as executive sous chef at La Cheminee in Ontario and opened the Sundance Inn in Glendora.

Throughout his career Chef Santana has exhibited his unique talents in a variety of food shows:

He is a member of the Inland Empire Chefs and Cooks Association and recipient of the prestigious Chef of the Year Award from the American Culinary Federation. 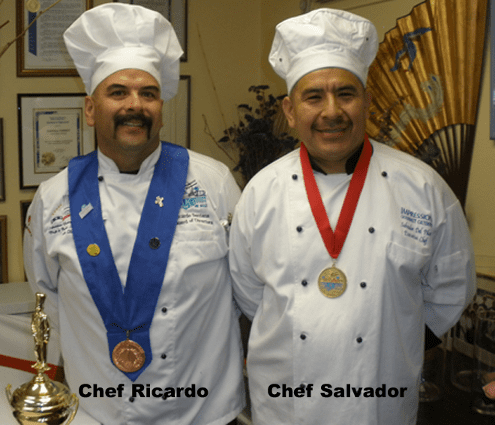